False Forgiveness come out of not fully accepting how hurtful an experience was (avoiding painful feelings), rushing the forgiveness process, or even not having any kind of forgiveness process and assuming that we can just decide to forgive and then sweep it all under the carpet.

False Forgiveness also tends to happen when people ignore their gut feelings and decide to forgive as they think it is the “nice” thing to do. Even thought they know the other person is highly likely to do the same thing again they feel they “should” forgive. They are not really forgiving as they are just building up resentment and creating a lot of anxiety waiting for the next time it will happen. They are using “forgiveness” as an excuse to tolerate bad behavior, so the do not get the sense of freedom and lightness that true forgiveness brings.

In a co-dependent situation, where two people’s patterns of addiction hook into each other, there is very little forgiveness present. It may look like one partner “forgives” they other on a regular basis, but really it is False Forgiveness as they are reconciling without any real forgiveness taking place. If there was real forgiveness taking place one person would become free of their entanglement. That person would then negotiate for the kind of relationship they want and if that wasn’t forthcoming they would simply bless the other and move on to the extent that was practical.

The thing to do to avoid False Forgiveness is to make sure you engage in a forgiveness process which lets you include you gut feelings. where reconciliation happens, but no real forgiveness work has been done.

A powerful way to freedom, happiness and success. 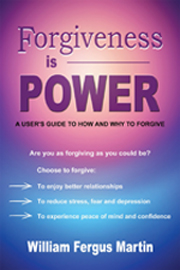